Do you know the childhood ditty "For want of a nail, the shoe was lost; for want of a shoe the horse was lost; ... The kingdom was lost - All for the want of a nail"? One of my mistakes was to not purchase electrical converters in the US and bring them with me. Without a converter I was not able to charge my computer; without the computer I couldn't download pictures from my camera... I wrote part of this entry on my IPad, which not only has a longer battery life than the computer, but also has been charged. When Amanda and I went shopping, she was clever enough to go into an Apple store and buy a new charger.  I have finally found a converter, but it has taken over a week!  Another barrier has been finding consistent Internet access - presumably we will be set up tomorrow (Monday) in our apartment and then will be established, at least technology-wise.  (By the way, I have found the learning curve on the iPad to be very steep.  I like my PC much better.)

Now for a few notes about our travels so far:

Amanda and I spent a lovely hour-plus getting manicures and pedicures the morning of our departure - it was relaxing and probably genuinely beneficial in terms of preparing the bodies for the long sit on the plane.  Amanda did melt down when Ralph (the dog) was crated, and taken from her to be put on the plane.  I was very pleased with airline personnel, TSA folks, and flight attendants through the entire process of screening, boarding, and flight.  They each took extra care to help Amanda feel more comfortable and assured about Ralph.  The flight to Munich was uneventful and we were even able to nap for a bit.  We deplaned in Munich at 8 am Munich time and 2 am NC time.  We were able to find a minibus taxi to take the three of us and our 4 suitcases, carry-on bags, and dog crate - we really were quite a load!  And excellent news!, the Holiday Inn allowed us to check in immediately and so we slept for a few hours prior to refreshing and exploring the city. 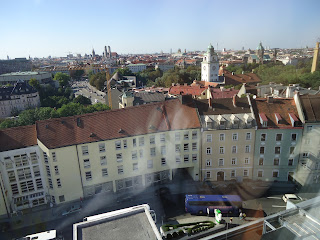 The view from our hotel in Munich 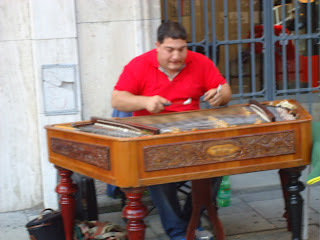 A street musician, playing what looks like a cross between a harpsichord and a hammer dulcimer. 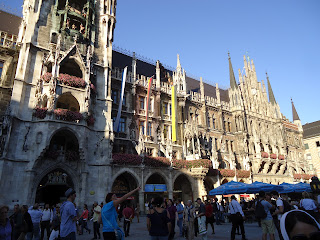 Marienplatz, the city center of Munich, with the historic town hall 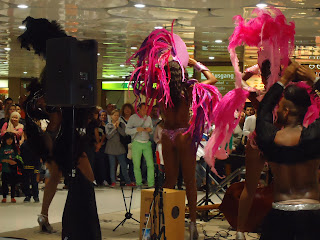 ﻿
We happened on a dance performance in the mall that was below our hotel. Amanda commented that one would not see such skimpy costumes in a mall in North Carolina! 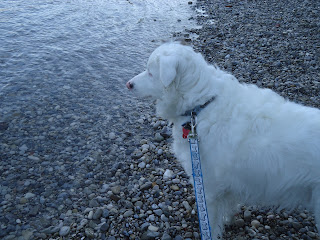 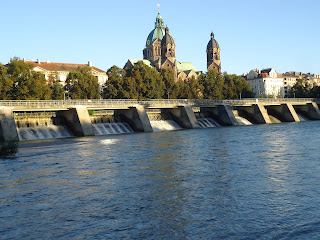 Ralph enjoying the view and the view he and I both saw from one of our walks.  This river runs through the center of Munich and has miles of walking paths along it. 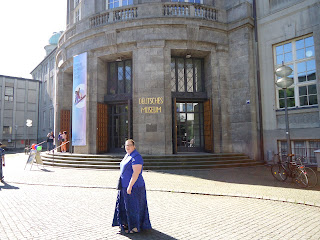 Amanda in front of the Deutsches Museum, where we spent a most enjoyable 6 hours.  I believe I read that it is the largest science and technology museum in the world.  It is especially interesting in its approach: each exhibit emphasizes the evolution over time of a particular kind of technology - like engines, transportation, film, textile-manufacture, etc.

Some initial general impressions and observations:
And now to our new apartment...