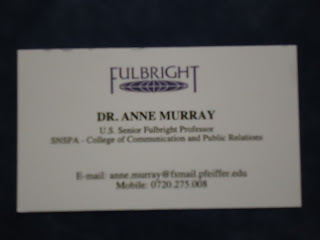 On Monday I had cards printed for myself.  Using business cards is very common here in Romania and serves as an easy way to provide contact information.

I taught my first class last night (Wednesday). Already I am struck by a number of contrasts with my teaching at Pfeiffer. Earlier in the week I was told, “We are supposed to have 14 classes in the semester, but since we started late we will have only 12". The last two of those classes will take place in January. I was also told, “Classes are supposed to be for 3 hours, but the students and faculty will not do that, so we only plan for 2". Like at Pfeiffer, my students will be predominantly working people, therefore we have evening classes. My class will meet from 5 to 7 pm. Last night I ran over by a few minutes and was surprised to learn that another class meets in my room at 7! 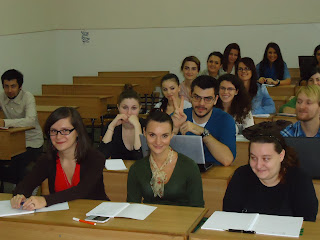 I was told to expect 49 students, twice my usual class size at home.  However I had only 28 there last night.  I was not given any kind of official roster and simply had the students write their names on a piece of paper. I also asked them to introduce themselves after I had the written names in hand so I could begin working on pronunciation.

I had also been told they would be “very much looking forward to being taught by a ‘native’ English speaker”.  I was certainly impressed with the facility most of them have with English.  There were a few who are clearly struggling more than some, but all who spoke up had good skills.  A number of the students specifically stated they chose this particular master’s degree program because it is completely in English – and is a rare degree in that regard.  They want to improve their English language skills along with others they might have.  Several students mentioned being fluent in other Romance languages, and in fact some are working in jobs using French or Italian.

I expect to teach content will be that is very similar to my typical Organizational Behavior class, although I certainly have to be open to having them apply concepts in ways that are meaningful here in Romania. Just last night, as I introduced “why study Org. Behavior”, with one of the reasons being increased diversity of the workforce, we got into a great discussion on prejudice and minority issues, making some comparisons between the Roma people and African Americans.

The students have no textbooks – mostly due to cost, but there also seems a culture of not using texts.  So I was prepared last night for lecturing, with some PowerPoint slides to illustrate.  At one point I commented that it might be a good idea to take some notes and reminded them of the assignments and the exams.  The response was, “aren’t you going to share the PowerPoint?”.  So I also learned via the subsequent conversation that some sort of listserve exists for the program.  All of the students enrolled in this English language masters – in communication and public relations – take exactly the same classes.  One of the students volunteered to post the slides and so I emailed them to her this morning.  A good resource to know about!  I will assign some seminal articles that they might find online and, if the materials that I sent from the US ever arrive – it has been 2 months now – I will be assigning some text reading as well. 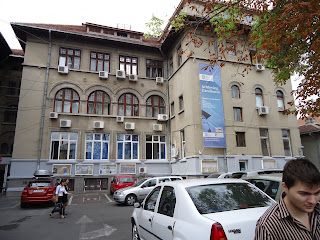 This is SNSPA, the university for which I teach, but not where my classes meet... 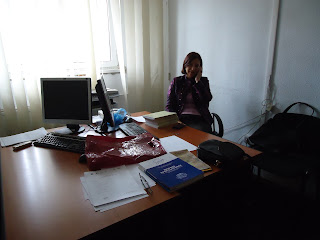 This is my director, Dr. Diana Cismaru, in her office at SNSPA. 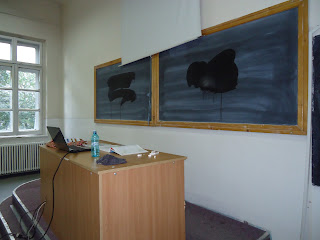 The building in which I am teaching is not the university building I was introduced to and live near.  I thought I was being very clever to have found an apartment within easy walking distance of my university.  It was only Monday of this week that I learned classes are held elsewhere.  The 'elsewhere' is 2 metro stops away, a little far for walking but doable if the need arises.  It is a school that I suspect dates from the communist era and it is in not very good repair, but it has desks, chalk, a projector, and students who want to learn.  What more do I need?  I am definitely looking forward to getting to know these students better.

I asked if anyone might be interested in doing some dog sitting and immediately got several responses.  It will be helpful to get some folks lined up so that when the opportunity comes for use to take a weekend to explore another part of the country, we can do so.  I also mentioned that I had brought my 23-year-old daughter and would anyone be interested in meeting her…  Almost every hand went up, they suggested I bring her to class next week, and 2 students issued specific invitations for tonight!

The worst is that the building has the same type of toilet as at the train station... 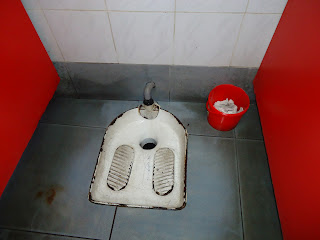