Unfortunately I got quite sick at the end of our time in Mamaia, the resort town on the Black Sea.  Our trip there was followed by official Fulbright orientation in Bucharest and travel back to Constanta, on the coast, for an American studies conference (which was an excellent way to network with a number of people, based in Romania and other parts of Europe).  Back home on Saturday, do laundry, clean house, and visit the grocery store on Sunday.  And, today - Monday - Patricia and Jerry arrive from Turkey for almost a week.  For all these reasons updating my blog this morning will consist mostly of posting some pictures and providing short captions.

Amanda, Ralph, and I travelled by train to Constanta and then took a taxi to Mamaia. 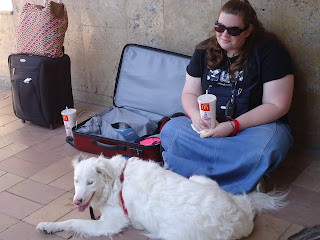 Patiently waiting for the train...  (suitcase open to get out Ralph's water bowl) 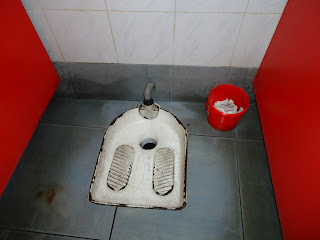 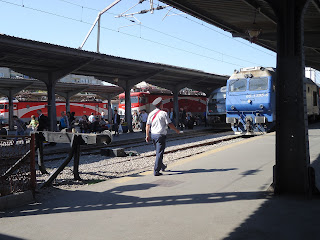 Our train coming into the station 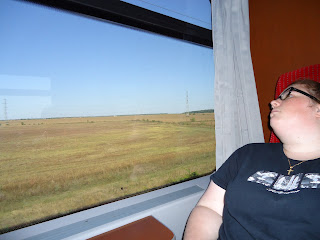 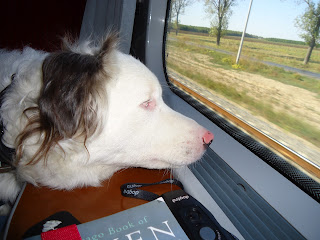 Amanda and Ralph both relaxing and enjoying the passing countryside.  We passed many acres of now fallow - following the harvest - fields.  Very large grain elevators and train cars marked "cereale" suggest the primary crop in this region. 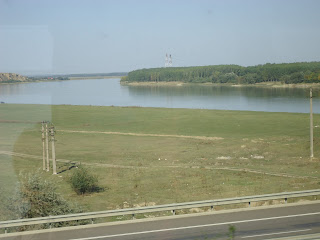 Crossing a canal that joins the Danube with the Black Sea at a place south of where it does so naturally. 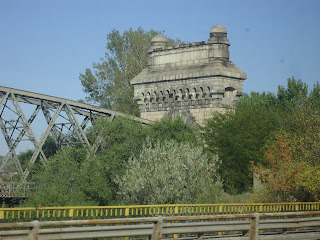 An abutment of a bridge built in the 1800's that at the time was remarkable for its span. 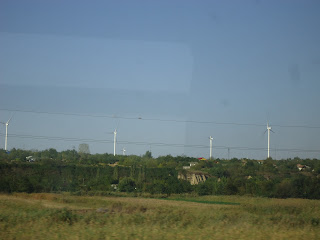 As we got closer to the coast I noticed a very large wind turbine area.

In Medgidia, I saw a train with a umber of flat cars on which were military vehicles - trucks and tanks.  As we passed, I saw a lovely white church behind it.  If I were more of a photographer and less of a picture-taker, I might have been ready to snap the picture.  It seemed an ironic juxtaposition of elements.

Finally - over an hour late - we arrived in Constanta. 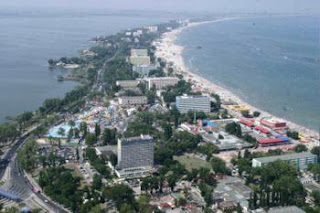 I do not claim credit for this aerial photo of Mamaia.  The Black Sea is to the right; Lake Siutghiol to the left.  Our hotel is located somewhere at the top of the photo, as it is on the far north part of the resort area. 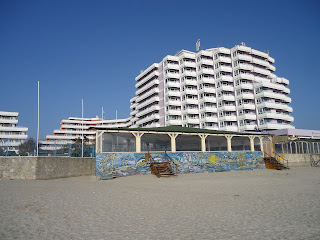 This is our hotel, the 4-star, Best Western Savoy.  When we checked in on Wednesday, we were literally the only guests at the hotel.  They did get some additional folks over the weekend.  We were disappointed to find that the swimming pool was unavailable and that there were no restaurants in walking distance.  We alternated between ordering delivered food and taking a taxi to Constanta to eat. 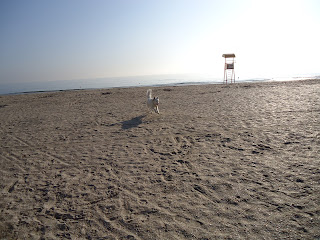 Not disappointing was having the beach to ourselves.  Each morning except the last, when I was sick, Ralph and I went for long walks on the beach.  He loved being able to run without a leash. [Ralph is deaf and mostly blind, but has been trained with an electronic collar, which I was using.  He stayed near me most of the time.] 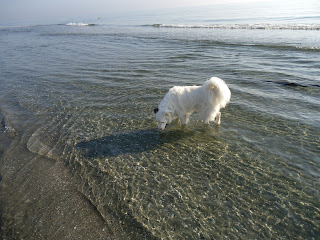 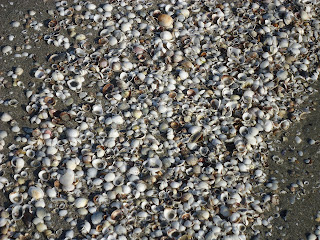 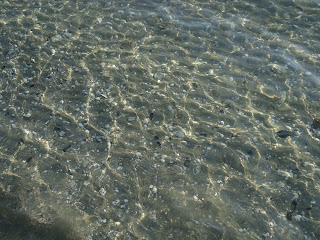 The water was clear, and warm enough that Amanda and I went swimming 2 afternoons.  It is also a very gradual slope, so that one goes quite far from shore and is still standing on the sandy bottom.  The sand was not as fine as I'd been led to expect, but was a lovely spot to look for shells.  We were able to find several unbroken whelks, 3-4" long. 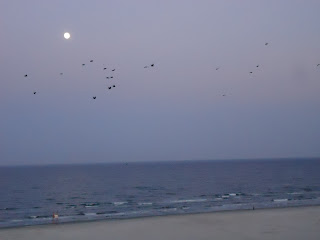 The night view from the hotel balcony...
Posted by Anne Murray, Ph.D. at 1:08 AM