On Tuesday we had a very heavy walking day.  We began at one of the large open-air markets that also has a large covered-market area.  We bought a few things for meals over the next few days, but mostly just enjoyed looking at the produce and the people.  Lovely fresh produce! 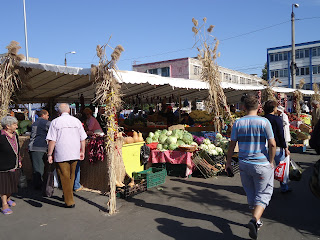 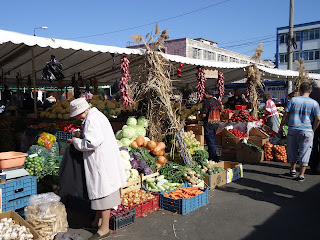 We then went downtown, stopping first at Cismigiu Gardens (http://www.spottedbylocals.com/bucharest/cismigiu-gardens/), a large and very lovely public park that I had not yet visited.  I continue to be impressed by the lovely green spaces that Bucharest includes. 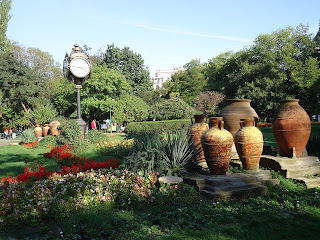 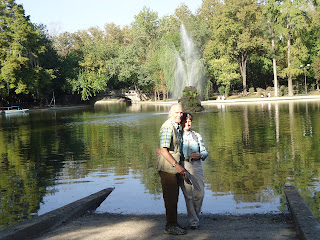 From the Gardens we walked part of the historic center, viewing some of the lovely old architecture from Bucharest’s heyday in the late 19th and early 20th centuries. 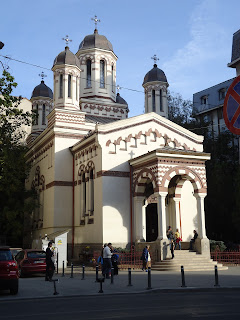 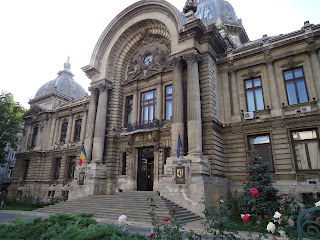 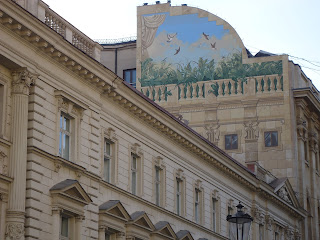 (Note that the upper right part of the building above is a trompe l'oeil mural on a flat surface.) 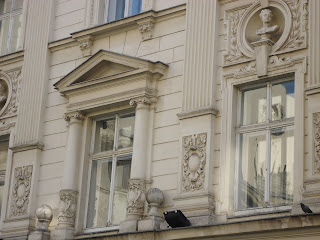 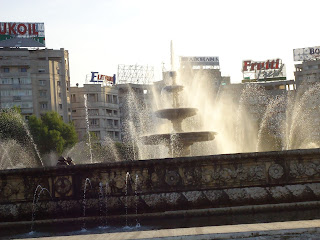 We had a few minutes of sitting in Piata Unirii (Union Square), munching on fresh, warm pretzels (a not to be missed treat!) and admiring fountains prior to the final part of the day - a guided walking tour of historic Bucharest.  If you do any travelling in Europe, do be sure to take note of this group: http://guided-bucharest.com/ue_free_tours.html.  The website provides information not only about the tour in Bucharest, but also the network of tours in Europe.  One pays a donation at the end, rather than a set fee, and our guide, Simona, was delightful and knowledgeable!  We were with her for almost 3 hours and received an excellent overview of the city.  I now know a number of places I would like to return to for a more extended visit. 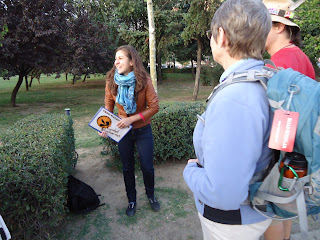 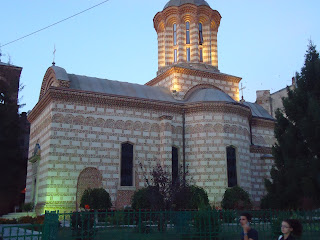 A mostly reconstructed exterior of the oldest church in Bucharest.  Its status as "oldest" is based on the presence of 2 medieval columns inside that are part of the original church on the site. 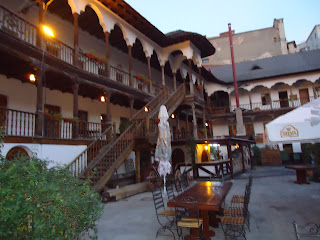 A very-much reconstructed interior of Manuc's Inn, an inn built originally in 1808.  It is a rough square, surrounding the central courtyard, part of which is seen in this picture.  There is only one entrance to the interior which provided security to those staying at the inn. 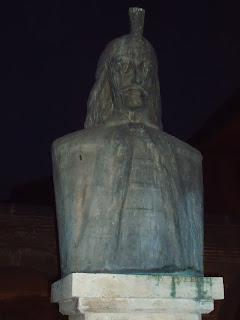 A bust of Vlad Tepes, a 15th century ruler, on whom Bram Stoker based part of the story of Dracula.  Of course the truth about Vlad, the Impaler, is plenty gruesome enough without the fiction of his being a vampire.  In the 6 years of his reign he impaled some 20,000 people - mostly invading Turks, which is what makes him a bit of a hero for most Romanians.  Because of his strict policies regarding punishing folks, he was also able to leave a gold goblet by the public fountain for anyone to use... (It was never stolen.) 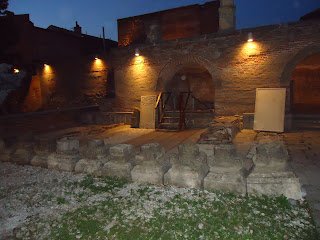 A section of the Princely court, from medieval times, being excavated.