As I write this, it is Monday morning at about 7:30 am.  I have been up for an hour and have taken Ralph for his morning constitutional in the garden.  I have also had my breakfast and am settled with a cup of tea to let you know of a pleasant at-home weekend...

On Saturday I met a group of folks with whom I'd connected online (via Meetup.com) to visit the Botanical Gardens and Cotroceni Palace.  Amanda opted out of the adventure. I chose to travel via metro and my feet, using a metro stop I had not used before.  The walk was next to an industrial site, complete with nuclear cooling towers, viewed below from within the Botanic Garden.  So I don't think I'll bother with that walk again. 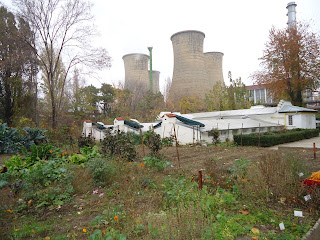 Inside the Gardens was much more pleasant!  Yes, it was a cold day and we were all bundled up, but there were still lovely plants growing and I met some interesting people for conversation.  There was Ahmed, from Egypt, who organized the event; Anna and Cora, who are both from the Netherlands; Jessica from the US (and who is a former Fulbrighter, who decided to stay and teach English here); and Fabrice from France.  We were the hardy ones who walked around the gardens for an hour and a half - about 10 others met us for the tour of the Palace. 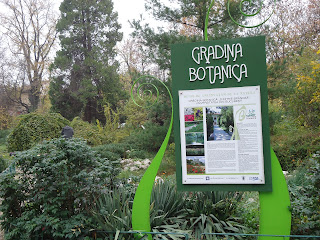 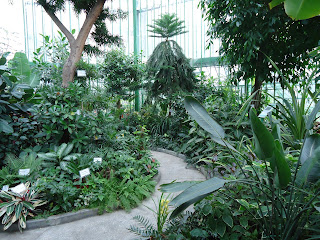 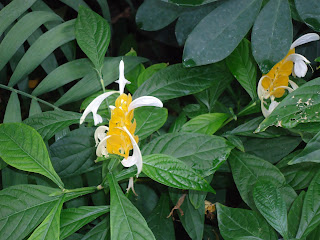 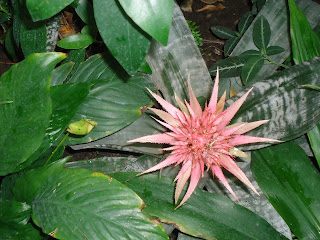 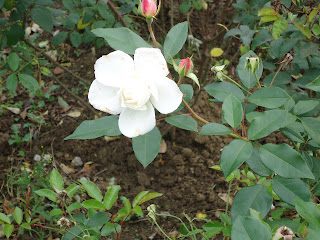 It was decidedly warm inside the tropical greenhouse, but the rose in the bottom picture was growing outside in the rose garden.  Returning here in the spring and summer is definitely on my list!  Bucharest has some lovely green spaces within the city and this is clearly one of the nicest.

We then crossed the street to the entrance for the palace.  There we had to exchange passports for id badges and go through full airport-style security.  We also had to turn in cameras! (So images below are gathered from the Internet.) The palace was the official royal palace from the 1600s when parts of it were first built, through the late 1800s when Carol 1 and his family did major renovations putting it as it mostly is today, until 1947 when King Mihai was forced to abdicate the throne.  The Communists made it a training school for children and then Ceausescu made it a hotel for visiting dignitaries.  Today it is one part museum and the rest is official residence and offices for the president of Romania.  (For more details, see http://bucharest.romaniaexplorer.com/page_10814.html) Our tour was in English, with a very knowledgeable, interesting, and energetic tour guide.  It was very pleasant to chat with her and be able to ask questions.  I was very sorry I was not allowed to take pictures as there were some magnificent architectural details I would have liked to "collect".  My favorite room - indeed, the favorite for most of our group I think - was the library.  I also very much liked the Norwegian room. 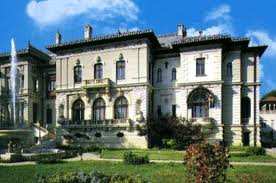 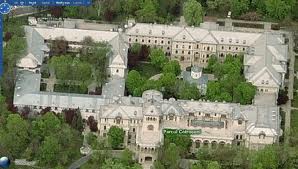 This aerial view is a great perspective - the museum (the part we were allowed to see) is the L-shaped portion made by the top and right sections of the right rectangle.  Inside that right courtyard is the Orthodox Church into which we also went.  (It is new because Ceausescu had it demolished.  The good news is that the people who demolished it saved parts - like columns and interior art work - that were used in the reconstruction.) 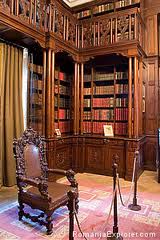 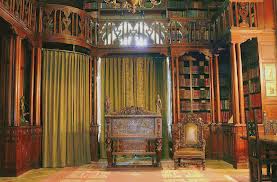 Behind the curtain on the left is a secret stairway that goes to the king's bedroom - just in case he wanted to quietly nip down for bedtime reading... 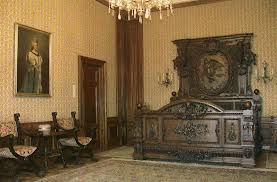 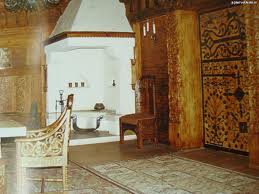 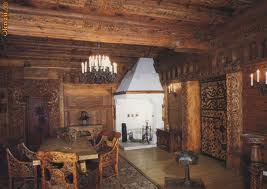 The two pictures above are the "Norwegian room" - I love the wrought iron work on the door! 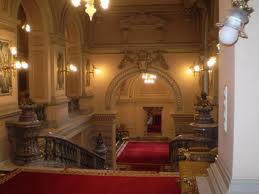 I returned home at about 5:30.  Amanda and I had supper, talked about our respective days, and watched a movie.

Sunday we went off to church in the morning - I think I have mentioned previously that we are mostly regular in our attendance at the Anglican church.  I miss the diversity of topics in my Unitarian Universalist Fellowship from home, but I very much like feeling part of a spiritual community.  Members of the congregation - which is very small! - have been most welcoming and kind.  This day I took notice of a statue in front of the church that I had not attended to previously: 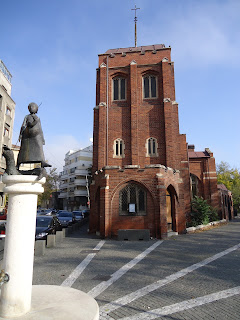 We walked home from church via our new favorite bookstore.  Beautiful building, LOTS of books - with plenty of them in English, DVDs, CDs, tea, artwork, a cafe, lots of space -- who could not like this place!?!

After lunch, we took Ralph and ourselves to Floreasca Park, about 10-15 minutes walk from the house.  Amanda tried out the really tall cement slide and Ralph enjoyed running, sniffing, and interacting with other dogs.  All in all a good day! 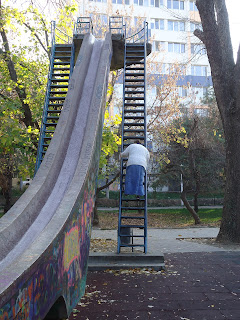 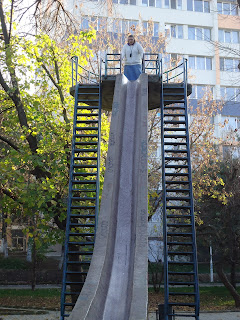 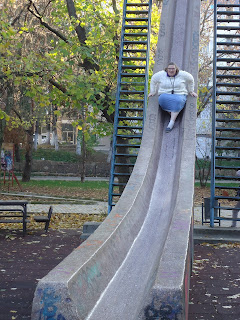 With all the fresh air over the weekend I slept very well last night!  I am now prepared to make up a midterm exam to give my class tomorrow...