Did I take pictures? No. Did we celebrate the day and the spirit? Yes, indeed!

Of course, as Thanksgiving is an American holiday, there was no recognition here.  I began my recognition of the day on Tuesday when I taught my class.  I took in a treat that I shared with the first 25 or so folks who came and told them it was in honor of American Thanksgiving.  Wednesday I received an email from some one at the Fulbright commission asking if anyone wanted to connect with a former Fulbrighter from the U.S. who had done his Fulbright experience in Spain and was traveling in Europe at least until his money ran out.  I quickly responded inviting him to both our Saturday night party and also to Thursday dinner with Amanda and me.

Thursday, Amanda joined the autism center group for swimming.  She reported enjoying the pool very much and also reveled in the fact that even among the staff, she was one of the best swimmers and had the highest degree of comfort in the water.  Apparently this is a regular activity for the center in the winter and so she will certainly join them again.  (This is a good thing as it appears we will not be getting to use the pool at our house that I was so excited about.) While she was doing that I went to the market at Obor - I have mentioned this market previously and have since learned that it is considered to be the best market in all Bucharest, and perhaps even in the country.  I was overwhelmed - again! - by the abundance of fresh produce.  I had no difficulty at all filling my shopping cart - imagine a large bag on wheels - in fact, the problem was I was filling it and knew that I was going to have to cook and store what I bought!

OK, I did take one picture - here is the abundance that I purchased: 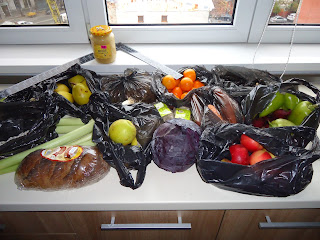 As an aside, Obor market also has many no food stalls and one part is devoted to hardware.  There I was pleased to find a large metal 'square', an L-shaped ruling device.  I did not bring one from home and have been missing it in bookbinding activities.  Razvan said I got it for a good price, which was
also nice to learn, especially since I am pretty sure I paid a finders fee to the woman whom I asked
about finding one.  She went from booth to booth asking in Romanian and when we found it, had me
pay her and then she paid the booth operator...  I am pleased as it is a most useful item and one which I will gladly donate to the studio when I leave the country.

Back to food and celebrating the abundance of harvest time...

Thursday evening, Amanda and I met Jake (the previously mentioned Fulbrighter at loose ends for the holiday) at Readers Cafe, a small restaurant near us that offers a variety of foods at reasonable prices - and is owned by an American.  It seemed appropriate for the day.  We thoroughly enjoyed sharing stories and activities with Jake - he is a very nice young man who is clearly making the most of his opportunity to travel in Europe.  On his high recommendation we have added Sarajevo to our list of cities we would like to visit.

On Friday I spent time cooking some of the abundance.  I made leek and potato soup, baked red cabbage and apples, wild rice salad with walnuts, apricots, leeks, and clementines, and lastly, toasted walnuts and dried squash seeds together for a snack munchy.  I was pleased with my domesticity and also with the results!

Saturday evening we welcomed David, Elena, Barbara, and Gene who are all Fulbrighters, along with Gene's spouse, Mirea.  I provided the wild rice salad and the red cabbage dish, while others brought homemade bread, local wine, spinach balls, and a special cake for dessert.  The 'prize' went to David, who spent several hours making sarmalia, Romanian stuffed cabbage rolls.  All of the food was great, but best of all we had great conversation and fellowship.  I felt more connected to several of these folks than I had before.  I am hoping to capitalize on this connectedness re bookbinding...  Gene is working on translating some Romania poets into English - I think that might make a very nice handmade book.  Elena is researching urban planning and frequently walks in historic neighborhoods, as do some of the others.  Sounds like a useful connection for getting more pictures for the Romanian doorways book!  Elena was born and raised in Romania, moving to the U.S. only 10-12 years ago.
Mirea also was born and raised here, and Gene and David are both first generation Americans, of
Romanian parents.  Barbara first came as a Fulbrighter in the 90s, came a second time and then
stayed...  So there is a wealth of knowledge in this group about Romanian culture and its contrast
with the U.S.

All in all, I say we celebrated the spirit of the day very well!