Last Tuesday, election day for the US, the Embassy here in Bucharest hosted a party for Americans and other interested folks to talk politics, watch the election results, and have an excuse for visiting with one another.  It was a nicely done affair, held at the Intercontinental Hotel.  For me it was a great chance to reconnect with some Fulbright folks and catch up on various activities.

While there I was asked to be a guest on a Sunday evening talk show for one of the cable news channels, Digi24.  On Sundays at 19,30 local time (that's 7:30 pm written in American), Balazs Barabas hosts a half-hour show dedicated to news outside of Romania and this past Sunday he focused on the American election.  He filmed at least one commentator from the Embassy there at the party, but I was asked to actually be on the show. 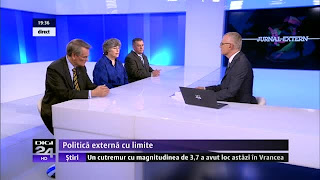 I was one of 4 guests, the others of whom were all Romanian (the 4th guest replaced the man on my right about halfway into the show).  When I arrived I was introduced to the man who would be translating for me and was then hooked up to both a lapel mike and an earpiece so that I could hear the translator.  I wish we had had just a little more practice time before the show began as I found it quite disconcerting to watch and hear someone speak in Romanian, while simultaneously English is coming into just one ear.  Depending on how much patience you have for watching or reading the clips and links provided below, you may see me looking like the proverbial deer in the headlights or more relaxed and confident of what I am saying...

The following are transcriptions from parts of the show.  If you open them in Google Chrome (and quite possibly in other browsers as well), the pages will be translated to English.  I guarantee I did not say exactly what the translation has me down for... (smile!)

And presumably, this link below will take you to the full show.  You want Digi24 Jurnal-Extern (External Journal) dated November 11 - and will probably have to scroll down the show menu to get to it.  For me as a participant, it was a packed and fast-paced half hour.  If you do manage to get the show, but don't want to wade through all of it, I was given the opportunity to have the last word and that is where I like to think I was at my best...  http://www.digi24.ro/emisiuni/video#57072
Posted by Anne Murray, Ph.D. at 5:54 AM