Sarmale is a traditional Romanian food served at festive occasions and so it is traditionally served at Christmas.  On Christmas Day I participated in preparing the sarmale and then eating it with my friend, David, and on Dec 26 I was a guest at Diana's (my director at SNSPA) house for more sarmale.  Let me share a little more information...

Sarmale, or stuffed cabbage leaves, come from the Turks and variations are prevalent in this section of the world.  In the fall people starting purchasing whole cabbages to put into brine so they would be ready for Christmas sarmale.  While it can also be made with grape leaves (typically in summer and early fall when such are in season) and can be made with fresh cabbage leaves that have been lightly boiled or steamed to become flexible, traditional Christmas sarmale is made with pickled cabbage leaves.  Like any regional food there are individual differences that make one recipe slightly different from another.  The basic must-have ingredients besides the cabbage leaves are onions and rice.  The most traditional version is made with pork, but a vegetarian version - de post, referring to its use during the Orthodox fasting times - is not uncommon. Here is a video (about 4 minutes) that demonstrates a process that generally takes an hour or more of prep time and 1-3 hours cooking time:

David and I had a fun time together making ours.  David's parents are Romanians who emigrated to the US in the 80s, so while he is fully American he grew up in Romanian culture.  However it took coming here to live for him to make sarmale for the first time - when he treated us at Thanksgiving (see that post).  By the time we were rolling the final sarma, I felt rather adept at shaping the rolls and tucking the ends in just so.

Sarmale is traditionally served with mamaliga (there is a little u-shape over the first a, making the pronunciation "mummaleega"), a kind of polenta served with sour cream.  The texture of the corn for mamaliga is somewhere between corn meal and southern grits.  It is cooked slowly until just the right consistency.  The sour cream (smantana, also with the u-shapes, so pronounced smoontoona) is way better than any sour cream I have ever tasted in the US.  It is not as sour, creamier, and fresher-tasting.  David and I also served it with telemea, a cheese a little like feta.  What a feast!

Yesterday, Diana started us with appetizers of pumpkin with cheese - a recipe I need to get from her as it was most delicious! - and bean spread.  Second course was a light, clear, vegetable soup (also delicious!).  And then we had the sarmale and mamaliga!  She made her sarmale using textured soy protein as a substitute for the traditional meat, so it had a very different texture and flavor.  Also good and yet, I think I will stick with the mushrooms and other veg as I prefer that.  For dessert there was a selection of fresh fruit and a sample of cozonac, another very traditional item, this one made by Diana's mother.  It is a not particularly sweet cake with a swirl of chocolate and nuts.  (As I do not typically eat sugar, I had 3 bites to give it a proper taste and then continued with the fresh fruit.)  As I said above, what a feast! 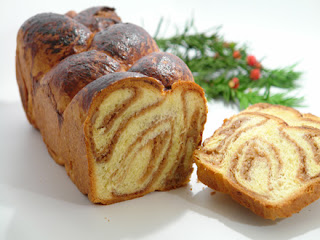 Now all this writing about food has made me hungry for lunch.  And guess what?!? I have leftovers from my two Christmas feasts, so I think I will have more sarmale for lunch...
Posted by Anne Murray, Ph.D. at 2:38 AM