At midnight on New Year's eve I was standing in my kitchen, where I have really large windows, looking south toward the bulk of the city watching fireworks.  Bucharest people definitely like to make noise and light to herald in the new year!  I counted no fewer than 9 points of origin as I watched the colorful panorama.  The show lasted for almost half an hour, having begun about 11:45.  My camera cannot capture pictures like that so I have liberated some representative pictures from the Web.  First however a reminder of what my kitchen looks like, with the large windows: 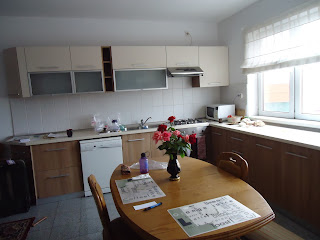 Fireworks downtown, over the statue of King Carol I: 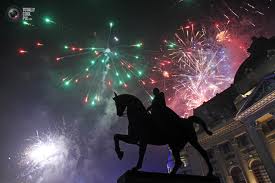 Fireworks in the historic, Lipscani district: 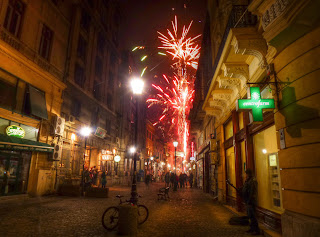 And now a few pictures of the holiday lights I have enjoyed this season.  I live near Piata Romana, which really truly has looked like this every night since early December: 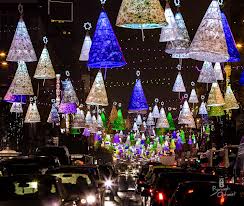 A less dramatic photo of the same thing: 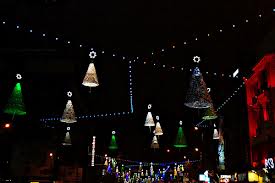 Below is the Christmas tree at Piata Unirii, further south than Romana: 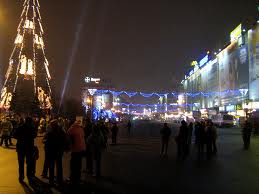 So how did I spend the new year's holiday, other than watching fireworks?  Both with new Fulbright friends and enjoying quiet time to myself.  On Saturday, the 29th I attended a gathering at Gene and Mirela's home near Piata Romana (actually they live literally across the street from the Anglican church we have been attending).  Gene is a Fulbrighter from Chicago who also has Romanian parents and whose wife, Mirela, is Romanian.  I am pretty sure that I was the only one at the gathering who did not speak Romanian and I also believe that Felix's mother (the only name I knew her by) was the only person there who spoke no English - and yet the conversation flowed, sometimes in Romanian, sometimes in English, and sometimes in both as translations were made.  The excuse for the gathering was to "share a slice of Cosonac", which I learned comes in a number of varieties.  In fact one of the loaves served had been made without sugar, with me in mind!

Arriving at Gene & Mirela's I was reminded of a cultural tidbit I have been slowly absorbing... The invitation had been for 3:00.  Because I was talking via Skype with sister Patricia, I arrived about 3:30.  I was first and Gene was still in the shower...  When I said, "oh, I thought I was running late", Mirela's smiling reply was "but we're on Romanian time!"  The majority of the guests arrived closer to 5. :-)

On Sunday, Eli & Anne and their friend Webster arrived from Brasov where Eli is doing his Fulbright work.  Webster had been visiting from Washington, DC and would fly out the next day.  Anne and Eli decided to spend the holiday in Bucharest and I was the lucky recipient in hosting them.  In between their outings for sightseeing and visiting with other friends, we had some excellent conversations ranging (in alphabetical order only) from art to education to philosophy to Romanian culture...  An excellent time!  I also picked their brains a bit about hikes in the Brasov area and am looking forward to heading their way...  Eli also asked me about a conference he is preparing that will look at educational comparisons between Appalachia and the Carpathian mountain area.  We had fun brainstorming ideas and I look forward to contributing.

When they left Tuesday morning (New Year's Day) Ralph and I escorted them to the metro station and then headed to Parcul Circului.  I have been to this park before, with Amanda, but not since the cold weather set in.  The day was cold, but bright and clear, making for lovely walking.  We have had enough above freezing temperatures that most of the snow is gone, but one still has to be careful of packed icy patches.  It was very pleasant walking in the park, watching others also out enjoying the day and greeting a few folks with "La Multi Ani" (la mults ahn), which means "to many years [ahead]" but is used as a general "happy new year".  I saw & heard a group of men in animated conversation with the word "America" coming up periodically; I watched a young girl slide down a hill with delight; and Ralph romped in the dog park area with two new acquaintances who seemed glad to play.

I also managed over the last few days to finish binding one new book and have everything ready for sewing two additional books.  And I have been doing research for our upcoming Mediterranean cruise, including making plans for a lesson in Turkish marbling (ebru) in Istanbul and meeting an Italian papermaker in Rome.  But these adventures are for another posting...
Posted by Anne Murray, Ph.D. at 12:25 PM