A Sample of Romanian Healthcare

I had opportunity to check out one aspect of the Romanian healthcare system in early December and observed several differences with the US system that are decidedly not negative!  I had been told by my neighbor Alina shortly after moving into the apartment that the emergency room down the block was one of the most respected in Bucharest and – should there be a need – to not hesitate to go there.  On Dec. 6, the evening of St. Nicholas Day I cut my hand deeply enough that I thought it warranted stitches, so to the emergency room I went.

When I arrived, holding a bloody napkin to my hand, and asked a guard at the door to point me in the right direction he escorted me in and to a desk.  Positive difference #1: I was immediately shown to the treatment area.  There was no time spent answering lots of questions while registering.  (While I was being treated, someone did come and get my name and basic info from my passport, but that was it!)  Within just a couple of minutes I was being seen by a physician who spoke excellent English. She started cleaning the wound and asked if I were up to date on my tetanus (yes!).  Because it was a dirty cut she did not want to stitch it up, but instead wanted to clean and dress it, provide support so I wouldn’t keep opening it, and check it the next day.  Difference #2: because it was after midnight (Amanda and I had both been to St. Nicholas night parties) and she wanted to see me the next morning she offered a bed in the hospital.  She actually encouraged me to stay the night saying it would be easier on both of us in terms of her cleaning it again.  But I didn’t want to leave Amanda and it just didn’t feel right to occupy a hospital bed for a cut (even a pretty bad one), so I refused.

Next stop was to orthopedics where the technician made a splint for my hand to immobilize the cut.  He then swathed the whole thing in yards of gauze.  Positive difference #3: he made the splint using plaster and gauze and he made the sling, complete with padded portion for behind my neck out of gauze alone.  I remember when the same thing would have been done in the U.S.  Now, however I think it is much more likely to be given a pre-fab aluminum splint and a cloth sling with straps and buckles.  I label this a positive difference on the Romanian side because the plaster & gauze method is less expensive and I suspect more environmentally friendly.

I was then given a prescription for antibiotics and shown the door, with instructions to return first thing in the morning.  Positive difference #4: So I say, “Where do I go to pay?”  And they say, “You don’t need to pay anything.  This is Romania.”  I learned subsequently that emergency care is free to everyone and that because I had first entered the system through the emergency room, there was no cost for any of my follow up visits.  So I walk across the street to a Nonstop pharmacy, more about which at the end of this tale, picked up my antibiotics and went home to get a bit of sleep.

The next morning I reported back to the hospital and found my way to “plastic surgery”, the section to which I had been directed.  This was the only time I waited a long time and that was because I did not know the “rules of engagement”.  Not so positive difference #5: there are no people acting as schedulers or appointment-checkers.  The system, that I learned after much observation and confirmed when I finally saw my physician (yes, I saw the same person each time I went in), involves opening the door to let the nurse inside know which doctor you need to see, then corralling said doctor when he/she comes to the clinic.  I saw my doctor and thought she saw me the first time she came to the clinic from the emergency room, but she stated later that I need to “grab [her] arm” next time.  I never waited more than about 10 minutes subsequently.

Upon entering the clinic, I was immediately struck by difference #6.  First, I should say that I am using the word “clinic” to indicate the room in which I am to be treated.  Along the hallway we are in are doors for ophthalmology, general surgery, dermatology, and plastic surgery. In the hall are a few benches for patients to sit on while waiting to go behind the doors. Behind the door is one relatively large room with a long bench down one side.  I and about 6 other wound patients are sitting on this same bench being individually treated by our own doctors.  The multitude of gauze was cut off, my cut was cleaned well (which hurt!), dressed, and then swathed again with the splint.  This procedure was repeated the next day and then every other or third day for a total of 10 days, until I was allowed to remove the splint and simply use a Band-Aid (except it was a generic Romanian version).  I labeled the group treatment a positive difference again because it is cost effective and utilizes fewer resources.  There are many ways in which we in the US could cut costs in health care and this approach seems to me a reasonable one.  The US is a much more individualistic society than is Romania, however; to many US citizens privacy is all-important.

Of course being seen by a physician in the US this many times for simple wound dressing would increase costs, but that is a different issue…  Physicians here go straight from high school to medical school.  There is no undergraduate liberal arts or other degree first.  When I spent time earlier in the fall talking with Romanian students who were interested in studying in the US, they could not understand why we require a 4-year degree prior to medical school.  Physicians, like my Dr. Muraz, who work in a hospital, are not paid huge sums of money, but they do make a decent living compared to many folks here.

Here I am in my splint and sling: 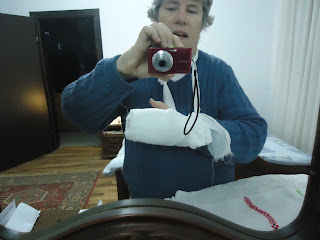 It has been a little over a month now.  The cut is 95% healed.  I still have a little swelling and am still working at getting full range of motion back, but there will be no lasting effects.  I declare my experience with Romanian healthcare to have been a success!

One more note on pharmacies, which play an integral role in healthcare in a way that is different than in the US.  Here pharmacies sell only health items; not everything that our US drugstores do.  Homeopathic remedies are as commonplace as allopathic items.  While there are some items out in the store to be picked up directly by the customer, most things are behind the counter.  One tells the pharmacist (most of whom have good English skills, for which I am grateful) what the symptoms are and the pharmacist recommends treatment.  So one time I went in for cough and sore throat and came out with a bottle of brown liquid that tasted a little like molasses and was extremely effective.  Another time I went in for a more personal complaint and was asked “Do you want to treat the symptom or the underlying cause?”  (An excellent question!)  With only one exception I have found the pharmacists to be helpful in providing both recommendations and also information.  This approach to dispensing medicine seems to me to relate to earlier comments I have made about people accepting personal responsibility here in Romania.  I find it interesting that in a country that is highly collectivistic as a culture, accepting personal responsibility is a given.  And yet, in our own individualistic culture, blaming someone else and litigating that blame is more common.  Perhaps this might be something else we could learn?
Posted by Anne Murray, Ph.D. at 2:00 AM