OK, here is my most recent catch-up post...  In mid-December I accompanied Amanda to Munich where I saw her onto a direct flight back to Charlotte.  I then stayed in the Munich area by myself for a little quiet time.

The first thing I want to take time to say is that I could not have been more impressed with Lufthansa personnel in Munich as they took time to learn a little about Amanda and her personal challenges so that they could then accommodate her on the flight.  While there were tears as she embarked on this long flight alone, I knew that she was in good hands and that she would be successful.  She returns in a few days with her father accompanying her.  I am a little disappointed that she does not get to repeat the challenge and mostly the success of flying independently, especially given what I know about the care she received.

Once I left the airport, I found my hotel, dropped off my suitcase, and then spent some time wandering around... The next morning I joined a free walking tour (http://www.newmunichtours.com/) - I do love having discovered that so many cities have free (tips only) walking tours! - that put some context and history to the wanderings and pictures I took.  Here are a few architectural elements that captured my attention: 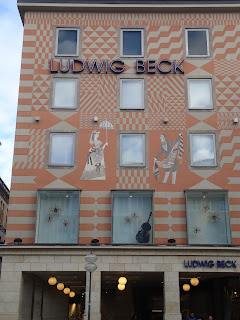 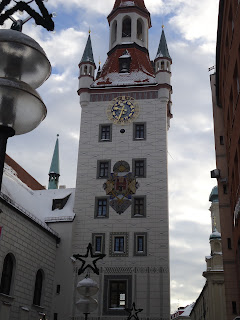 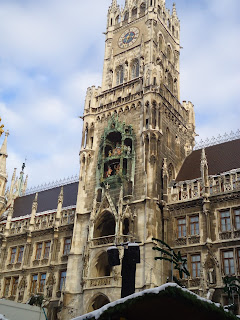 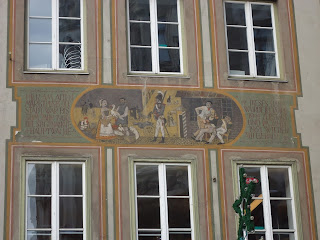 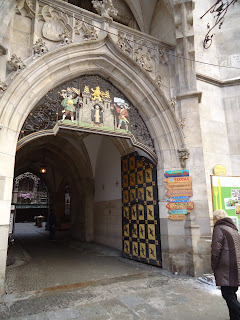 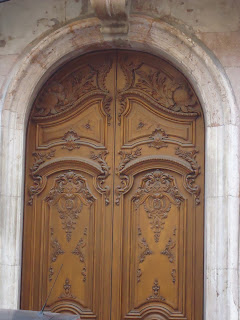 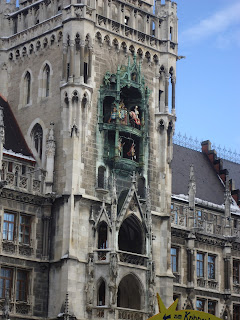 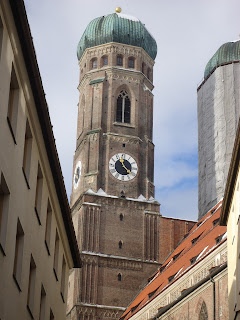 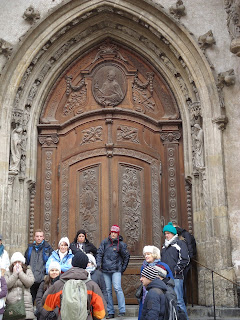 Above is our walking group in front of the church with the devil's footprint.  I loved the story here:  As the architect was overseeing the beginning of this particular church, the devil came by to see what was going on. The devil stood in the front door and looked down the nave, unable to see any light from windows.  So the devil thought this was a good thing - "there is no light and so people will turn away from God" - and offered to help the architect complete the building.  So the church was finished in record time.  When the devil came back to see the finished project, he stepped further into the church and noticed that the architect had designed the church so that from the front door the supporting columns blocked the light from the windows, but when one stepped fully into the church one was bathed in light from huge windows.  The architect's idea was that only when one fully entered the church would one receive the "light of God".  The devil was so upset by having been tricked that he stamped his foot really hard and to this day one can see his footprint in the entryway: 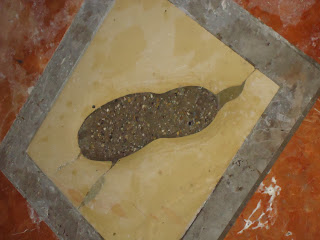 Another story I especially liked was also in this same church: During the time of the Nazis, many churches offered to store religious items from synagogues for safe keeping.  When the war was over and Jews were once again able to practice their religion freely, they were grateful to the churches that had helped keep revered items and often made donations to the churches.  This church wanted to provide a reminder to all of the need for respect and tolerance - and so, way up high where my little camera can barely capture it, is a painted menorah: 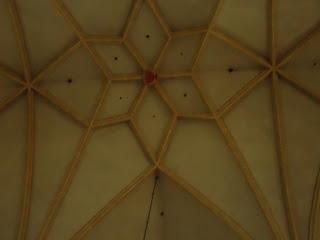 Back to the walking tour and displays, buildings, and features that caught my attention: 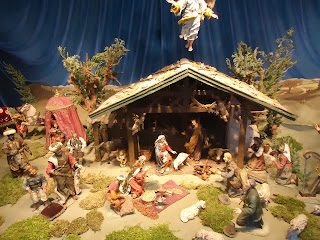 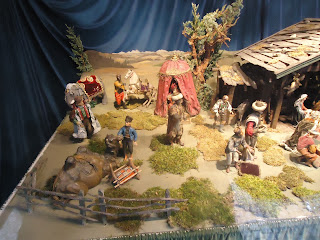 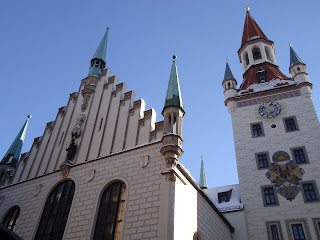 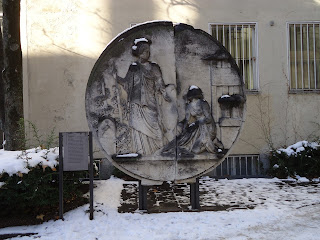 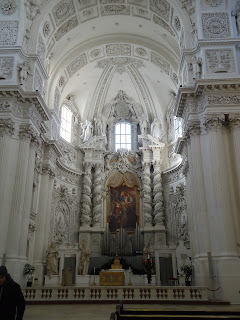 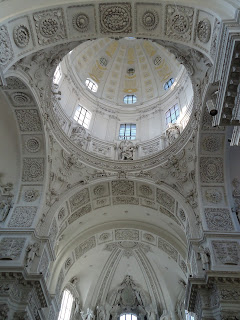 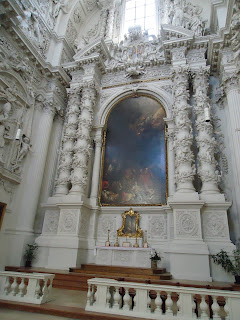 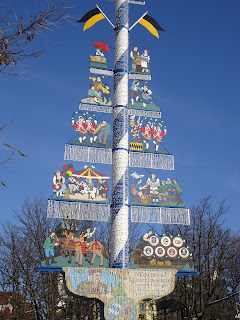 And time for another story... The pole above is a symbol of a town or region that depicts all the important products or activities of that town or region.  (This one is also covered in holiday lights, but that is not typically the case.)  Tradition has it that if the pole - which does have a special name that I have forgotten - can be removed without anyone in the town being aware, then it can be held for ransom.  This pole was once  stolen by another city and the mayor of Munich had to provide a party for the entire city before the pole would be returned.

I also spent time that day looking at some of the Christmas markets.  I enjoyed the festive mood and seeing the crafts but the only things I purchased were a wool hat and wool gloves.  The hat I'd bought in Vienna at the end of November and the gloves I had carted with me from the States were no match for the bone-chilling temperatures in Munich!  (continued in Part 2)
Posted by Anne Murray, Ph.D. at 2:55 AM