March 1 in Romania is a wonderful celebration of the coming of spring.  Here in Bucharest, I started noticing the red and white colors and the trinkets (martisoara) for sale about the middle of February.  (Amanda and I each had received from our Bulgarian host, David, a symbol of the celebration when we were there.)

But I think the holiday really began for me when Karen sent an email saying she had seen something that reminded her of me and so she had a small spring gift for me...  Before I could collect however, I had tea with a former student, Corina, and I asked her to explain the significance.  As I understand it, tradition held that boys would tie a red & white string around the wrist of a sweetheart on March 1. As long as the string stayed on through the end of March, they would be lucky in love.  Of course as these things do, the symbolism and the celebration grew.  Now, many trinkets can be purchased - from cheap manufactured things to lovely hand-made items - and they can be given to almost anyone as a symbol of luck in the coming season or year. Typically males give these to females, females give them to one another, but females do not give them to males.  Parents might give them to the teachers of their children, one might give them to the doctor, hairdresser, grocer, etc - whomever one happens to visit on March 1.  The red and white colors symbolize the contrast between cold and warm weather, death of winter and new life of spring, old and new...  One of my former students sent me a virtual martisor, sending the picture below in an email: 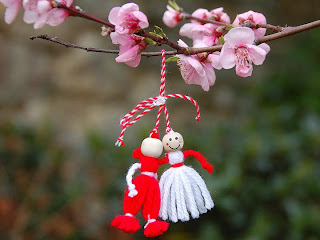 I finally met up with Karen, and also with David, on Thursday Feb 28.  We went to see a church so that I could photograph its amazing door (a detail from which is shown below) for my Romanian Doors book, then went to lunch at an Italian restaurant Karen had discovered and wanted to share with us. 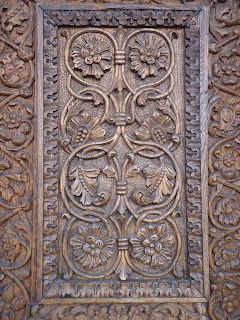 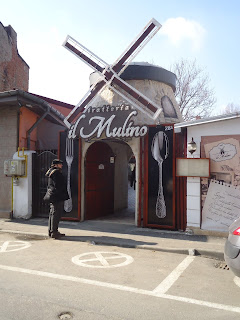 There she gave me a little handmade leather bound book!  Definitely perfect for me!  We then went to Piata Romana, where she had found the little books and I was able to get some to share with others. 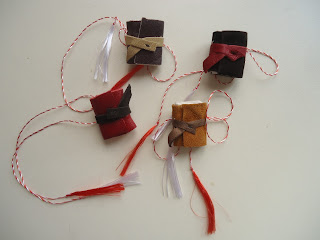 I enjoyed talking with Daniel, who makes his own paper and binds larger journals as well as these little ones.     I plan to follow up with him and learn more about what he is doing in terms of papermaking and binding.  I also enjoyed talking with Radu who paints small pictures and kitchen items for sale at this time of year. 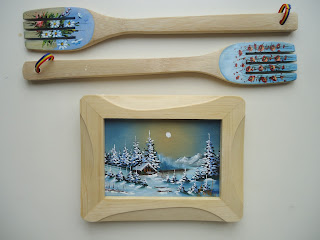 And then I headed home to share with Amanda what I had seen and learned.  She went to the autism center on Friday with several bracelets she had picked out to share with the girls she has come to know there.  And she came home with several trinkets and a small bunch of flowers as well.
We then went to the March fair at the peasant museum, where the selection of martisoara was amazing!  And here it was all handmade items!  Mostly in the form of small trinkets, but ranging to large and expensive items.  Here is a sample of items I selected (which will wait until I get home to be given away, but they will still carry wishes for good luck): 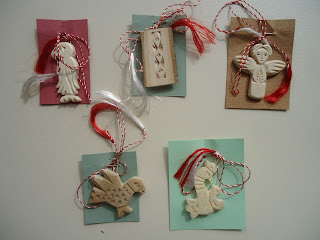 Petre, the man who carves these small items, is a retired art teacher. 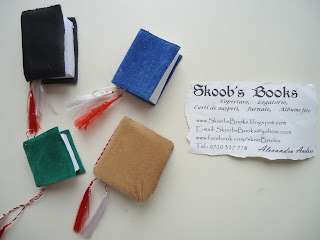 These small books are fun, but not as well crafted as the ones above that Daniel made.  But, I really like the creativity that Alexandra puts into her large journals.  She had one that used part of an LP record for its cover and one that had a collage of old postcards on its cover.
I also met a third bookbinder, Ioana, who does lovely embroidery on the front of her books: 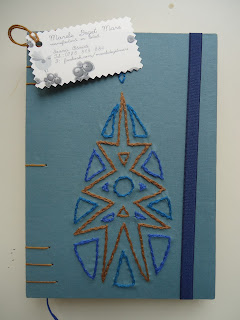 So not only have I celebrated a new - to me - holiday, but I have had the opportunity to visit with a number of craftspeople and have learned that there are several folks doing bookbinding in this city.

Here is a brief article with more information about the tradition of martisor.

Happy March 1 to all of you!