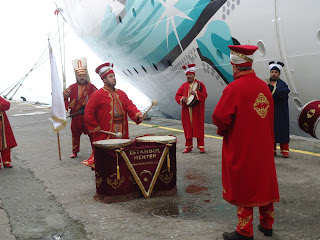 The ship docked in Istanbul at about 1:00 pm on Monday and departed 8:00 pm the following day.  Knowing that we had extended time and given the many sights and activities that interested the two of us, I decided to splurge on a private guide.  A most excellent decision!  Burcu Tokgaz was pleasant and knowledgable; she paid attention to what I had communicated both ahead of time via email and also once we met, so had a good idea of what interested us and how to interact with Amanda.  We were much more efficient as a result – moving from one activity to another was almost seamless and I am certain our experience was much richer as a result.  Amanda said it was like seeing Istanbul with a friend.


Burcu met us at the port as we disembarked from the ship.  We immediately took the tram to the Blue Mosque. We were hurrying a bit to get in between prayer times. The artwork is amazing and it was good to talk a little about Turkish Muslim traditions.  We were verbally pushed out the door when it was time for afternoon prayer.  Burcu pointed out that prayer times are determined by sunrise and sunset, so in the winter they are much closer together than in the summer. 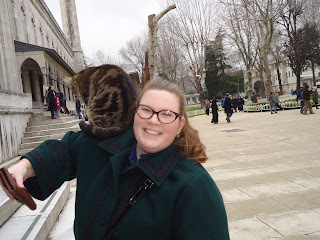 Walking to the Blue Mosque, Amanda met the first of many Istanbul friends.  It turned out that Burcu was also an animal lover... 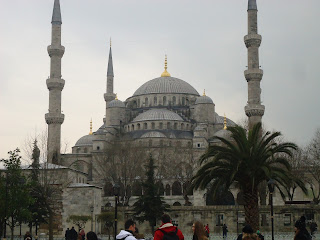 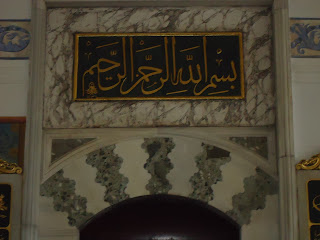 Both pictures above are of the Blue Mosque (details of which can be found here: http://www.bluemosque.co/, along with some lovely pictures)

We then moved on to Tokapi Palace, where is was very crowded since it would be closed to visitors the following day.  Again, we had to hurry and hustle a bit in order to see the parts that Burcu deemed most significant.  It was very clear we would have spent the greater part of our time waiting in lines had it not been for her licensed tour guide badge and her knowledge of the place.  While I remain skeptical of the literal accuracy, I was still impressed by the religious relics on display, the staff of Moses and David’s sword among them.  We concluded our time at the palace with a visit to the museum shop – Amanda looked at lots of jewelry and so this took a while. 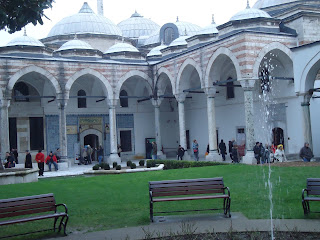 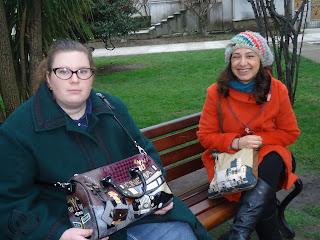 a short respite prior to going to the Museum shop - Burcu is seated with Amanda. 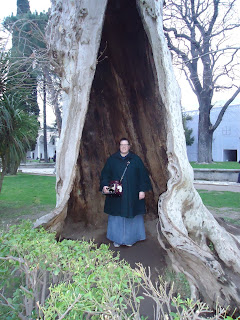 For the last task of Monday, Burcu delivered us to Les Arts Turcs II (http://www.lesartsturcs.com/), where I met Ali & Betul for my marbling lesson.  It was helpful again having Burcu for the transition. They were so very hospitable – feeding Amanda and providing her with Internet access while I was doing the class session. (They were also very generous in presenting her with one of their handmade tiles at the end of the evening, as a "reward for her patience".)  And they even drove us back to ship at the end. I loved, loved, loved my time with Betul and Ali as I learned Ebru marbling (and have shown pictures in the previous post).  Betul's method of teaching was to demonstrate the technique for each of several designs: tulip, daisies, rose, chrysanthemum, tree and then have me try to copy.

Tuesday, our second day, we met Burcu a little later than 9 am and walked to the Dolmabahce palace (http://www.dolmabahcepalace.com), the administrative center of the Ottoman Empire at its end, and also used by Ataturk during the early years of the Republic.  I enjoyed this one much more than Topkapi, mostly because we were seeing living areas with furniture rather than exhibits. 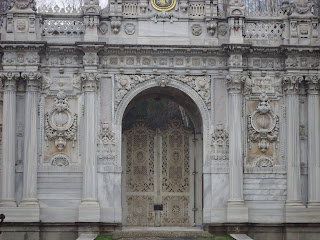 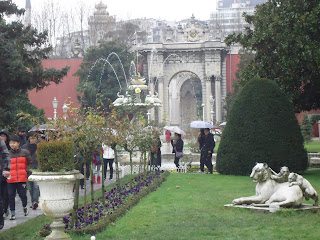 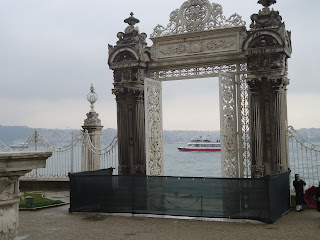 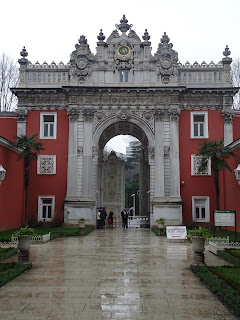 From the palace we took a tram to Hagia Sophia (pronounced "eye-ya"; http://www.hagiasophia.com/). The building was first an early Christian church.  When it became a mosque in the mid-1400s, the Muslims painted over the Christian mosaics, but did not destroy them. The building is now a museum with the artwork of both religious traditions visible.  Unfortunately Amanda had an unpleasant reaction to Hagia Sophia.  She enjoyed seeing the beautiful early mosaics depicting Jesus, Mary, and angels, and appreciated the architecture and even the Muslim calligraphy and decorative elements, but did not like that it had been turned into a museum.  To her this felt like desecration.  The final straw was when Burcu asked if she wanted to make a wish – I never did learn the source of this tradition, but saw there was a line at some element.  Amanda felt this was truly desecration in that neither Christians nor Muslims would believe in wishing… So Amanda needed to leave abruptly. She went out with Burcu while I went upstairs and saw mosaics and close-up pictures of mosaics. 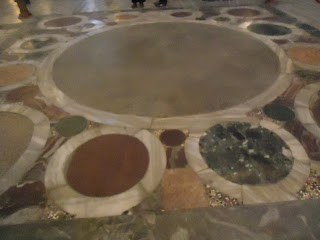 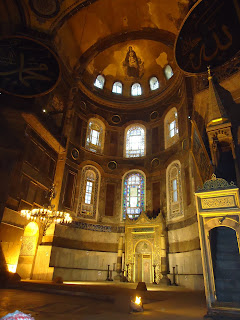 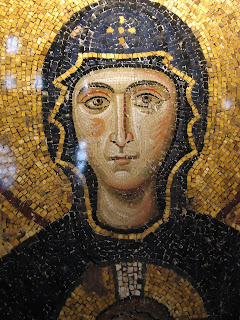 Above and below are my pictures of close-up pictures that were on display.  My little camera is not powerful enough to capture the mosaics this well.  (In the picture above this one, you get an idea of the height - this depiction of Mary is in the top center.) 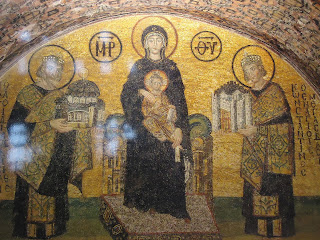 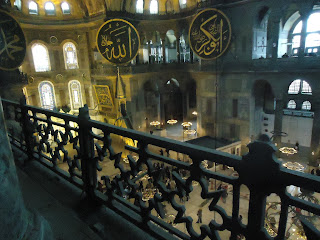 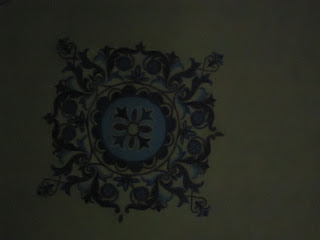 We then returned to Ali & Betul to pick up my now-dry marbling and to purchase a few additional items. 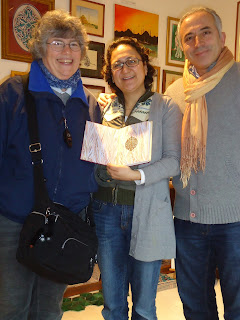 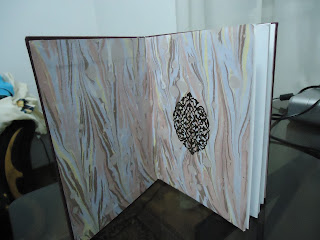 I purchased Betul's casebound book partly because I very much like the paper cut-out pasted on top of the marbling.  She sells her works through Etsy, if anyone of my readers is interested. 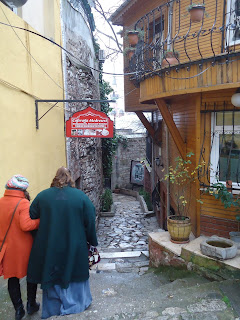 I especially liked Burcu's choice for lunch – Caferaga Medresesi (Community Art Café, http://www.tkhv.org/), an art/craft school where we had a private room with artwork to enjoy and an excellent traditional Turkish meal.  Notice Amanda and Burcu walking arm in arm down the narrow entryway - I would never have found this place. 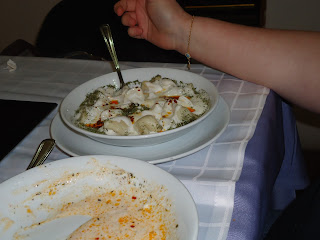 Amanda had “Turkish ravioli”, filled with chicken and a having a yogurt based sauce – she not only said it was delicious, but had 2 servings!  Burcu and I both had the same food (she also is vegetarian): lentil soup followed by an egg & peppers dish (a little similar to a scrambled omelet) followed by stuffed vegetables that were a bit spicy hot, but not burning - just a comfortable flavor that let me know it was there.  The staff were  wonderfully attentive and the manager treated us to halva for dessert, which we all shared. 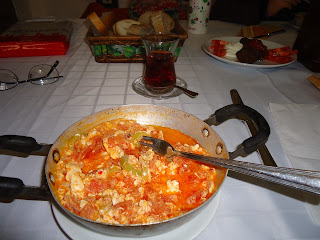 Our next-to-last tourist stop of the day was the Basilica Cistern (http://en.wikipedia.org/wiki/Basilica_Cistern), the largest of many cisterns (water collection devices) the Romans built under Istanbul. It is much bigger and more impressive than I’d imagined and could have been a very short visit, but we took time to dress up and get posed photos taken. 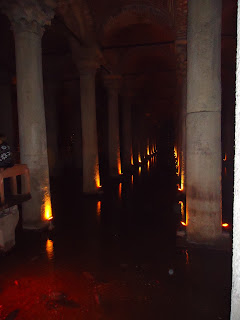 Above, one small part of this cavernous cistern.  Below, Roman recycling: the head of Medussa, originally a decorative element on top of a column, is now upside down and services as a column's support (and would have been submerged when the cistern was full). 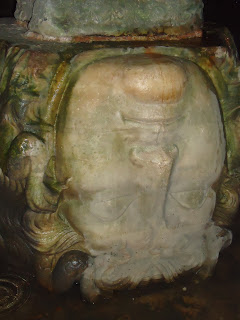 And, finally, much to Amanda's pleasure, on to the Grand Bazaar, where there are in excess of 4000 vendors along labyrinthine passageways.  Here again it was very helpful to have Burcu’s contacts and knowledge.  Amanda wanted jewelry and scarf and obtained both in pleasant relaxing situations.  Presumably we paid reasonable prices, we enjoyed social cups of tea with proprietors and were able to sit, as well as visit just a little – most pleasant interactions!  Amanda now has a lovely Turkish silk scarf and a necklace that is just right.