I am a well-educated, well read person and so I know a fair bit about the Roman and Greek civilizations; their overlapping histories, and the ancient treasures that remain.  But none of that knowledge was able to fully prepare me for seeing these ancient sights up close and in person.  To wander the location of the first Olympic games and to stand in the stadium area, knowing I was standing where athletes from 2500 years ago had stood filled me with awe.  My spirits were in no way dampened (pun intended) by the pouring rain we had that day (Friday, day 3 of the cruise). 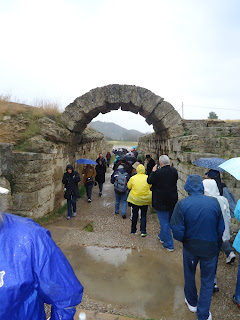 The same arch, through which all the competitors walked... 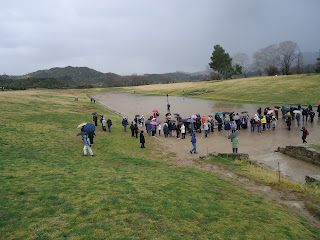 What looks like a lake in this picture is a reconstruction of the sprint field.  The first Olympic games were mostly running races.  You can see the rise in the sides where spectators would have been...  And I know this picture is unlikely to create in you, my reader, the same sense of wonder I had being there. 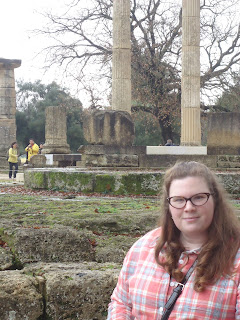 Amanda was impressed by seeing the location where the original Olympic flame burned and where still today it is lit prior to being carried to whatever modern site for the games... 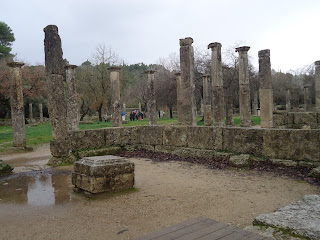 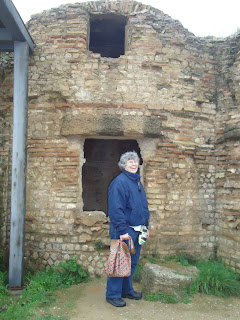 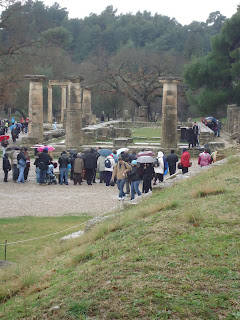 I was interested to realize that the site not only included several temples - after all, the area was both a religious and athletics center - but also numerous buildings for the various sports that were added over time.  It is indeed a very large complex.  The building I am posing before was a guest house for athletes.  The heating system (ductwork for heated water) is still intact after 2000 years.  This building was next door to one of the swimming pools available for the athletes.

I will share one story I found especially interesting:  If an athlete was found to be cheating, he was fined a sum of money.  That money was used to erect a statue to one of the gods.  On the statue would be a plaque that included the name of the disgraced athlete and the infraction.  These statues lined the path leading to the stadium as a reminder.

When we decided we were too wet to enjoy more of the outdoor sight, we went into the museum.  I found the display of the many tokens and effigies that had been found in the altar to Zeus fascinating: 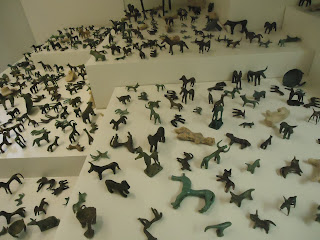 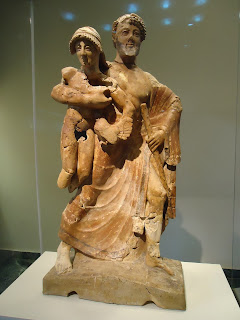 The above statue depicts Zeus and Ganymede.  It is a 5th century BCE terracotta statue that depicts a very humanistic Zeus.  The story is that Ganymede, a hero from Troy, was abducted by Zeus to serve as cup-bearer in Olympus.

I was also impressed by the statues below, also from the 5th century BCE, first of  Hermes holding the infant Dionysius and below, in not quite as good condition, the goddess Nike. 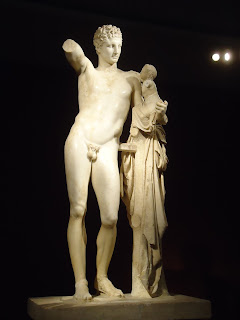 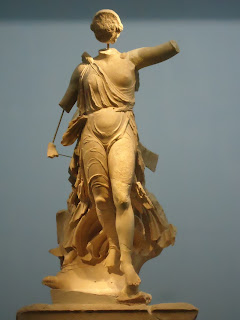 The following day, Saturday, we woke up as the ship was docking in Athens.  Here we spent the entire day at the Acropolis and the New Acropolis Museum (just opened last year - and "new" seems to be part of its official name). 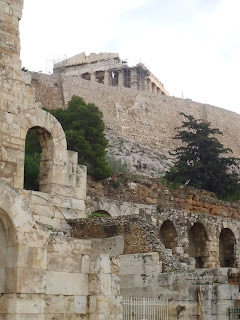 It is definitely a bit of a hike to reach the top, but well worth the effort!  We were also rewarded by a beautiful sunshiny day! 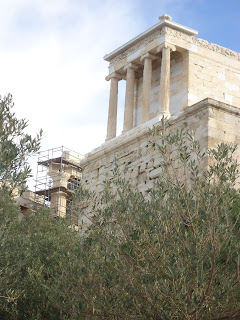 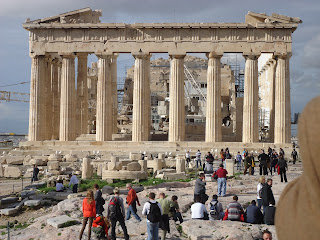 I learned that Acropolis is the name of the whole rocky area, on which the Parthenon is but one, albeit the largest, of many temples.  I don't know that I had been clear on that distinction prior to this trip. 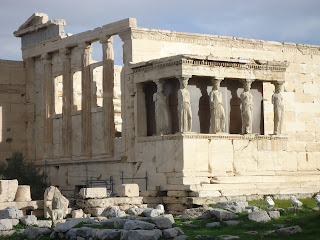 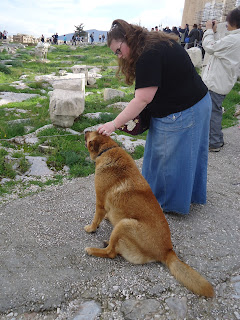 There are stray dogs all over these ancient sites, always ready for a little bit of loving attention, which Amanda is always ready to dispense. 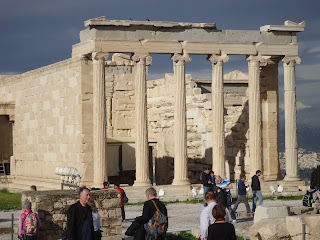 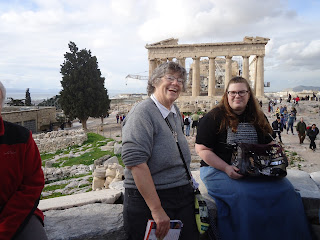 Above, I am holding the guidebook in my hand.  I remember the awe-inspiring art, immense-ness, and walking on marble -- for the details you can read your own guidebook (smile). 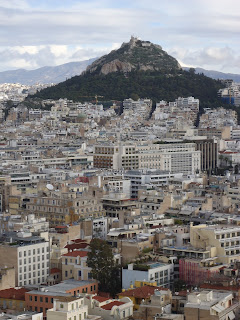 Looking across modern Athens at a monastery on another hilltop.

We had taken a bus arranged by the ship from the port to the base of the Acropolis.  The driver said, "be back in 4 hours - that is plenty of time" (and then he would have returned us to the ship a full 2 or more hours before we needed to be there).  After 4 hours we were still only part way through the museum, having spent well over two hours on the Acropolis.  We never did get to two other sites I had hoped for.  I don't understand how anyone can zip through something this amazing in 2 hours or less and say they have experienced it...  In any case, we missed the bus and instead took a taxi that returned us to the ship with about 20 minutes to spare.  Perfect timing!
Posted by Anne Murray, Ph.D. at 11:06 AM