We have participated in a few activities related to autism awareness this spring...

On April 2 we joined a number of folks from Invingem Autismul, the center where Amanda volunteers, and from a variety of other schools and centers to release blue balloons in honor of International Autism Awareness Day. 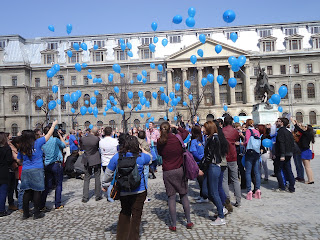 On that same day a short article was published about Amanda and me in Romania Insider, an online, English-language news source about Romania.  I was pleased with the tone of the article and it has led to another set of interviews, by another news group interested in our story.  See the first article here.

Then on April 18, we (and our friend Martha, see the post titled "Spring Visitors 2") were honored guests at the Blue Ball, a major fund raiser for Invingem Autismul.  Martha took the first two pictures below. 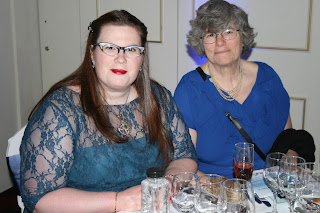 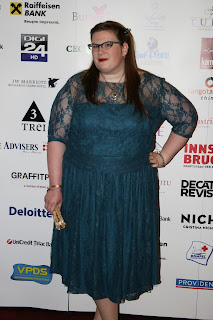 The next two pictures were taken by official press at the Ball.  Amanda spoke for a few minutes about overcoming challenges related to her autism and then her short film, "Sweet Tooth" was shown. 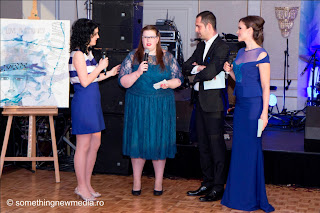 I managed to make Amanda happy and contribute to the center at the same time by being the winning bid on a 3-day trip to Innsbruck, Austria and a visit to the Swarovski crystal factory. 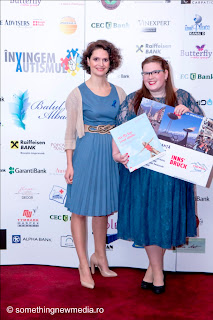 The day after the Ball, Amanda participated in an international panel discussion of 3 young adults with autism who spoke to an audience of parents, other adults on the spectrum, and professionals who work with autism.  Pictured below are Amanda's fellow panelists, Josef Schovanec from France (far left) and Scott James from England (far right) along with the translator whose name I did not get and Andreea Sorescu (in blue), the director of Invingem Autismul. 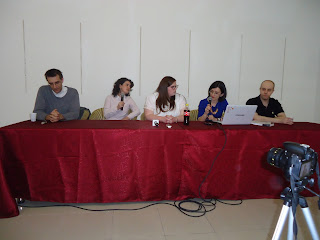 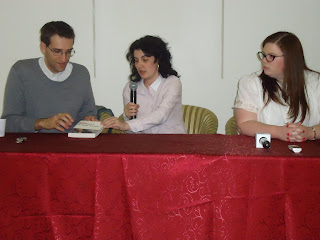 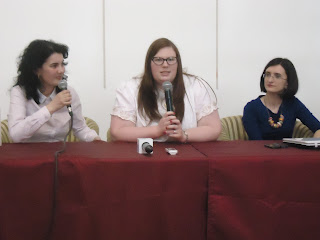 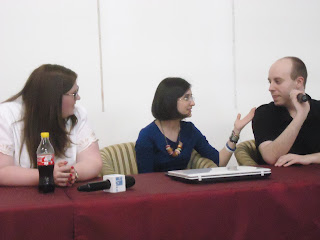 It was amazing to me to listen to the three of them.  In the first place I was impressed by how well they each spoke and shared of themselves.  It was also interesting to note how much their stories overlapped - wanting friends, but feeling isolated; being bullied and teased at school; struggling to make sense of the world.  And yet each has achieved some sense of success and is in a position to give to others.

The day ended with Amanda spending time with yet another autistic young adult, Alexander, who was born and raised in Germany, but who now lives in Bucharest.  I suspect we will see more of him.
Posted by Anne Murray, Ph.D. at 5:03 AM